Buy 2 or more bottles of Beast Sports Nutrition Super Test Maximum for only 42.99 each with free shipping!!

Buy 2 or more bottles of Beast Sports Nutrition Super Test Maximum for only 42.99 each with free shipping!!

Have you tried various test boosters only to be disappointed? Did you find minimal changes to your physique even while going hard in the gym? You don’t want to compromise for mediocre results, you want to maximize your muscle-building potential and take your workouts to new heights. We’re talking mind-blowing gains. Well, you wanted extreme and you got EXTREME! The most hardcore testosterone booster has finally made its way to the market. A formulation so potent that it is recommended to only take it once a day. Super Test Maximum is here and it’s changing the game!

Beast Sports in collaboration with Bryan Moskow aka “The Guerrilla Chemist”, have thought of it all in this formula and left no stone unturned when searching for the best ingredients at efficacious dosages to use to provide you with the most powerful natural test booster on the planet. The inclusion of  ingredients like Furostan®, KSM-66®, and Primavie® can help take your muscle-building efforts to the next level and help you add the quality size you demand. Additionally, the inclusion of S7™ can increase nitric oxide levels to help you attain an unreal skin-tightening pump unlike no other as well as helping to dilate your blood vessels to aid in shuttling nutrients out to the working muscles. Stop wasting time in the gym and start building the body of your dreams.

Your workouts will never be the same. Through the use of Super Test Maximum, you can feel a drastic difference in your strength. You may notice the weight seems unusually light. And that’s just the beginning. There are no smoke and mirrors here, just pure strength gains. Combine that with the added lean muscle mass that you can achieve and you have a commanding combination.

We looked at other products on the market and some are pretty good, but most are missing several key areas to not only help boost natural testosterone, but also help keep your overall health and wellness in mind. While Super Test Maximum includes pro-testosterone support factors as well as an anabolic growth enhancer in 5a Hydroxy Laxogenin, the formula also include estrogen and DHT defense as well as liver and kidney support. This all-in-one formula covers all of your bases, including helping to minimize inflammation and improve the health of your bones and joints to support the abuse you put them through in the gym.

Something this powerful will leave you thinking, “there’s no way this is legal.” But it is! A lot of work and research went into Super Test Maximum as we didn’t want to launch another me-too copycat test booster. No, we wanted the best damn product money can buy in helping you maximize your ability to add quality lean muscle mass – and we’ve succeeded!

The time is now to transform your physique. To break free from the limitations handcuffing your gains. Be prepared as there will be bars bending under extreme weight. And all you’ll do is smile. It’s time to release your inner BEAST!

A LITTLE MORE SCIENCE FROM “THE GUERRILLA CHEMIST”

Testosterone is the key to training extremely hard in the gym and building crazy amounts of muscle and losing body fat.  Super Test Maximum was scientifically formulated specifically to maximize your body’s natural testosterone levels, as well as keep a healthy level of estrogen in order to achieve your perfect physique.  SuperTest Maximum uses trademarked ingredients that are proven to increase the king of all anabolic hormones: Testosterone! This article will explain the science behind this clinically-dosed and loaded formula.

Furostan® Fenugreek extract 50% Saponins: Fenugreek seeds have long been used in both Ayurvedic and Traditional Chinese Medicine.  The seeds contain molecules known as saponins which are steroidal compounds that have been shown to increase both free and total testosterone in men.  In a 2017 12- week study involving 50 resistance-trained men, the group who received a fenugreek supplement demonstrated a 46% increase in free testosterone. Free testosterone is the more important value compared to total because free testosterone is unbound and available to your body to use.  Another study in 2010 involving 30 young, healthy, weight-trained subjects showed that taking fenugreek increased bioavailable testosterone levels by 26%. Also observed was that fenugreek might have aromatase inhibiting properties, as well. Estrogen and estradiol levels did not increase as expected. The group taking fenugreek also improved significantly on bench press and leg press 1RM.  Researchers also noted that the fenugreek group lost more body fat compared to the placebo.  Fenugreek has also been shown to increase libido in both healthy males and males with erectile dysfunction.

KSM-66® Ashwagandha extract: Ashwagandha is an Ayurvedic adaptogen that is mostly used to combat stress and increase fertility. It is so highly touted that it is often called the “King of Ayurveda” and oddly translates to “smell of horse.” The main active compounds in ashwagandha are called withanolides, which are steroidal lactones found in the root of the plant. KSM-66® is standardized to 5% withanolides, but also keeps the exact ratios of withanolides that naturally occur in the plant. Ashwagandha has tons of health benefits, but for the purpose of this article, I will focus on its ability to decrease cortisol and increase testosterone levels. Cortisol is a catabolic hormone released from your adrenal glands during periods of stress. While in small amounts it can be beneficial (fight or flight), prolonged elevated levels are more conducive to storing bodyfat and breaking down muscle tissue.

KSM-66® is a proven and powerful testosterone-boosting supplement.  From the research, it seems that ashwagandha stimulates LH and FSH to increase DHEA and testosterone production.  This is the same pathway your body naturally uses to increase testosterone. In a study involving 180 hypogonadic men, subjects given 5g/d of raw ashwagandha for 3 months showed an increase of up to 22%.3 Another study in 57 healthy males(average starting testosterone levels of 630ng/dL) given 300mg or KSM-66® twice daily for 8 weeks showed a 15% increase in total testosterone levels(the placebo only saw a 2.5% increase).  Researchers also noticed a significant increase in 1RM bench press and leg extension, as well as a 3.5% decrease in body fat(the placebo only dropped 1.5%). Ashwagandha has even been shown to increase sexual function, libido, desire, and fertility in women.  Typical doses of raw ashwagandha are up to 5g of root a day, and 600mg of standardized formulas like KSM-66®.

5 alpha-hydroxy-Laxogenin: This ingredient is a potent derivative of the naturally-occurring plant steroidal compound laxogenin, both of which are found in Smilax sieboldii. Laxogenin and 5-alpha-hydroxy-laxogenin do not bind with the androgen receptor, but do have an anabolic effect, as well as a patent application showing that they may increase the effectiveness of testosterone.  In the only study, subjects who received 22mg of 5-alpha-hydroxy-laxogenin for 28 days displayed an increase in max strength and muscle size greater than that of both laxogenin and the placebo. This was a small study, but it shows that this ingredient can increase both size and strength in weight-trained athletes and may have a synergistic effect with testosterone. The dose in Super Test Maximum is 50mg of 5-alpha-hydroxy-laxogenin.

Testosterone is the king to building muscle, however it can also convert to estrogen in the body. This process is called aromatization.  To help maintain healthy estrogen levels, Super Test Maximum contains 2 compounds shown to metabolize estrogen.

Japanese Knotweed (Polygonum cuspidatum): Japanese knotweed has been used in both Traditional Chinese and Japanese medicine and is an excellent source of resveratrol and its various derivatives. Resveratrol has been shown to decrease aromatization by acting as an aromatase inhibitor- blocking the conversion of testosterone to estrogen.

3,3′-Diindoylylmethane (DIM): DIM is the main active metabolite of indole-3-carbinol, which is found in many cruciferous vegetables including brussel sprouts, turnips, kale and cabbage.  The main mechanism of action for DIM is two-fold: it can, in low doses act as an aromatase inhibitor preventing the conversion of testosterone to estrogen (however in high doses can have the opposite effect), and it can modify potent estrogens into healthier estrogens via selectively hydroxylating certain parts of the estrogen molecule. For example, 4-hydroxyestradiol is a very potent estrogen that can cause gynecomastia in men.  DIM metabolized estradiol into the less potent 2-hydroxy estrone, which is then eliminated. DIM also binds to the aryl hydrocarbon receptor (AhR) which causes a downregulation of estrogen receptor production.  Some studies show that a metabolite of 2-hydroxyestrone, 2-methoxyestradiol can even help displace testosterone that is bound to sex hormone binding globulin (SHBG) to increase free testosterone levels. This is due to 2-methoxyestradiol’s high affinity to SHBG. Interestingly, 2-hydroxyestradiol is not suppressive to the HTPA where 4-hydroxyestradiol is.  This may also indirectly increase testosterone levels. Typical doses of DIM are between 100-300mg daily.

Testosterone also can convert to dihydrotestosterone or DHT, which can increase prostate size and male pattern baldness.  In order to combat this, Super Test Maximum includes 2 powerful compounds to control DHT levels.

Stinging Nettle Extract: Stinging nettle root extract contains compounds that have been shown to act as 5-alpha reductase(5AR) inhibitors. 5AR is the enzyme responsible for the conversion of testosterone to DHT.  The main compounds that do this are β‐sitosterol and scopoletin.  In a 28-day study in rats, treatment with stinging nettle root was shown to be effective for reducing enlarged prostate size due to benign prostate hypertrophy.  It was concluded that the mechanism of action was indeed inhibiting the conversion of testosterone to DHT.  Stinging nettle extract may also lower sex hormone binding globulin, the protein that binds with testosterone to inactivate it.  This effect may increase free testosterone.

Pumpkin Seed Oil Extract: The plant Cucurbita pepo contains high levels of triterpenoids, carotenoids, and phenolic acids. These phytosterols have been shown to possess 5-alpha reductase inhibiting properties.  There have been several studies in rats to confirm this. There are 2 in vivo studies using pumpkin seed oil extract to treat both benign prostate hypertrophy and male pattern baldness.  Both studies showed statistical significance in blocking the conversion of testosterone to DHT.

One unique ingredient to this formula is S7™, a patented blend of 7 plant-based ingredients that can increase endogenous nitric oxide (NO) levels by 230%!  S7™ works by substantially increasing your body’s antioxidant activity and thus lowering levels of free radicals.  In turn, by lowering free radicals and inflammation can increase the concentration of NO levels in the body and thus have greater blood flow. This is known as cellular redox signaling.  S7™ was added to this formula to help aid in blood flow, specifically to aid in erection strength and frequency.

N-acetylcysteine (NAC): N-acetylcysteine is an amino acid precursor to the body’s main antioxidant, glutathione. The greatest levels of glutathione are found in the liver, which is the body’s main detoxifier. When glutathione levels decrease, it makes it harder on the liver to metabolize substrates and can increase damaging free radicals.  Supplementing with NAC has been shown to increase glutathione levels, as well as lower free radical production and damage.  NAC is crucial to liver health and fighting cellular damage from free radicals. Daily values are from 200-600mg 2x day.

There is not a more potent testosterone-boosting product on the market! 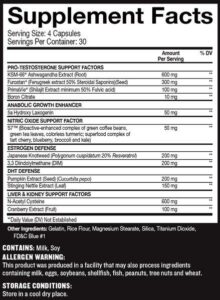